YOU ARE ALL GREEN ALIKE: bull run confederates part 1 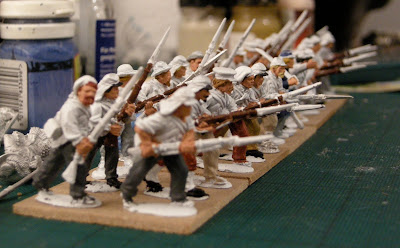 Just a quick shot of my next Confederates, made up entirely of Perry. Most are from their new releases earlier in the year to commemorate the 150th anniversary of 1st Manassas, so if you were curious about what the Sicilian-capped infantry looked like, you can see them here.

I usually base my ACW units on 40x45mm bases, but these ones are 45x45mm, to give the figures more space and to put across how the lines spread apart a little when advancing.

The officer is from the Zouaves command sprue, and he has a sword arm from the Perry plastic infantry box. I've also hidden three converted pieces using various plastic body parts, which I'll point out in a later post.
Posted by DanimalKingdom at 14:45